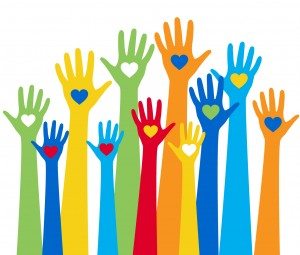 Read an article in today’s paper about a political candidate. Then, develop five interview questions that you would like to ask the individual. Attempt to answer one of your questions as you believe the candidate would.

The “Just Vote” campaign had a short, catchy slogan. Look through today’s paper, and identify another compelling slogan in an advertisement or article. Tell a partner why the slogan attracted you

Turn to the letters on the editorial page of today’s paper. What freedoms are these readers exercising? Do you think letters to the editor influence the way journalists write and what stories are printed? Form an opinion, and debate your point with a partner who holds the opposite view.

Almost every U.S. citizen over the age of 18 has the right to vote. What issues will affect the way you vote? Look through today’s paper and find three issues that the presidential candidates are addressing (e.g., the environment, the war in Iraq, etc.). Then, list these issues in order of importance to you.

Define the term “democratic” and list three countries that could be described this way. Using today’s paper, identify a story covering a person or country acting in a democratic or an undemocratic way. Explain your choice to peers.

There has been growing discussion about the U.S. turning into “Two Americas.” Discuss what you think this means. Then, search through today’s paper, and find examples of people who represent each side. Compare your list with a peer’s.

Speeches are an important part of any campaign. Why do you think this is? Using today’s paper, locate a story that details a speech, and find the name of the person who spoke. Now, write a short speech about yourself and your interests. Remember to keep it interesting.

Study today’s News section and count the number of times the words security, terror, threat or related terms are used. Does the concentration on these issues mean that other news is being overlooked. Is this right or wrong? Explain your opinion in writing.

George W. Bush isn’t just the president of the United States; he’s also the commander-in-chief of our armed forces. Based on the information in today’s paper, explain the U.S.’s goal in Iraq, and how the president is leading that effort.

The U.S. Congress is the legislative branch of the federal government. Congress makes laws, declares war and levies taxes, among other duties. The two houses of Congress are the Senate and the House of Representatives. List the names of the senators and representatives mentioned in today’s News section. What state does each represent?

Define the term “leader” and describe the type of person who makes a good leader. Then, flip through today’s paper and look at all the pictures containing people. Discuss the photo captions with a partner. Then, decide whether or not the person depicted is a leader.

The First Amendment protects five freedoms: the right to free speech, press, religion, assembly and petition. Identify examples in today’s paper of people exercising their rights as guaranteed under the First Amendment. Why are these freedoms essential to democracy?

The First Amendment to the U.S. Constitution guarantees freedom of religion, speech, press, assembly and petition. Locate an article in today’s paper that shows a citizen exercising one of these rights. Then, in writing, explain which of the above freedoms you value the most.